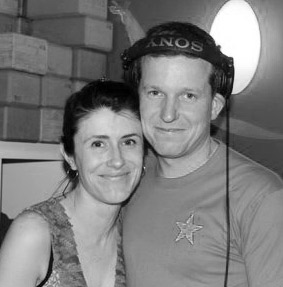 When I began my partner search with Anne, I had just bought my first home – a townhouse with bathroom tile I wasn't sure I could live with. She assured me that I wouldn't be there alone for long – or that if she was wrong, she'd be my personal tile shopper.

Anne “found” Chad for me on our first “scouting” expedition to Guelph. We'd discussed the type of people I wanted to meet, and my openness distance dating – or even relocation – if it meant finding someone really special. I was living in Whitby, and Chad happened to be visiting Guelph for the weekend from St. Catharines. We'd gone out for dinner to discuss our “game plan,” and were at our first venue of the evening – a small-town chic martini bar, tasteful, but not too glamorous.

I don't know when or how she managed to strike up a conversation with him without my noticing, but when I returned from the ladies' room, Chad had joined us at our table. He was wearing a really great shirt, and Anne later revealed that she’d used her knowledge of my love of men’s fashion as a cue to approach him.

Our conversation that night was easy and filled with laughter. We talked and danced with each other for most of the evening. If I’d been alone or out with friends, that might have been the end of it. But before the night drew to a close, Anne ensured that we had exchanged contact information. She also set up a brunch date for us for the the next morning! She even made reservations, and provided maps to the location for each of us.

We saw each other nearly every weekend after that, and within seven months of our introduction, Chad proposed. We felt our bond with each other owed so much to Anne's intervention that we asked her to perform the wedding ceremony for us, in front of our family and friends. She agreed, and we were married in July of 2005. We both live in Whitby now, in the townhouse with its beautifully renovated bathroom. Our first child was born on Leap Day, 2012.

When my wife was gravely ill – seven years ago, at the age of 56 – she made me promise that I'd try to meet someone after she was gone. I never broke a promise to her, and so within four months of her passing, I decided to put my best foot forward. I joined an exclusive dating network based in Toronto.

My first few matches were certainly nothing to write home about, and I became dissatisfied and disillusioned with the service – especially considering the money I'd spent. I called to cancel my membership. Anne was the matching consultant who took the call. She was very easy to talk to, and very sympathetic to my plight. She offered to personally oversee my account until I felt I'd had at least two worthwhile introductions. I agreed to give them one last chance.

Of the two matches Anne arranged for me, both were high quality women. They were exactly the sort I'd been hoping to meet. But alas, I could only fall for one of them. Allison was her name, and when I first set my eyes on hers, I thought I could get lost in them forever. I must admit I still feel that way. We began a romance that has brought such unexpected joy to my life that I can't believe my luck. I know Colleen would approve of our plans to marry in Ireland this October.

I'd wasted money on a local matchmaking service and had poor results when I started working with Anne. She was able to help me work out what I really wanted in a person, and opened up my mind to meeting guys who fell outside the guidelines I considered important. Like age. When she suggested I message Dan, who was almost 12 years younger than me, I was thought she was joking. She sure wasn't! In the end, I did it because I looked at his profile and realized she was right. He seemed great, and I had nothing to lose.

We hit it off right away, but when he and I first got to know each other, I was reluctant to tell him how much older than him I really was. (I look pretty young.) When he found out, months later, he was surprised - but we were already too much in love for it to be a big deal. I'm so glad I let her persuade me to try something different! Seven years later, we're still laughing about it.

I'd been alone for many years when I joined the dating service. My husband had passed away some time earlier, and all my children and grandchildren live in other provinces. I'm still a very active and independent person, but more and more of my friends had moved to retirement communities and I found it harder to socialize.

Anne was my matchmaker with the agency, and she ensured that I met a lot of interesting gentlemen. It was hard at first, because I hadn't dated in so long, but Anne always helped me to calm my nerves before I met them. She even gave me fashion advice!

Some of the gentlemen I met with couldn't keep up with me, and some wanted to settle down right away, but William was different. We were both looking for the same thing: a companion for all the fun that life has left in store for us. I'm very glad that Anne brought the two of us together.

After my divorce, my children and I moved to Northern Ontario. I had a great career opportunity there (I'm a physician), and we love the outdoors. But the social scene was dire for me. I couldn't believe how isolated I felt, and I found that the men I encountered at work-related events were rarely single. Outside of work, I didn't know anybody.

In the beginning of my membership with the agency that Anne worked for, I only met two guys over the course of six months. Both were total mismatches. It was as though the only criteria they were using to match me with these guys was geography. I was absolutely depressed and ready to give up on the whole thing when the manager – who I'd called to complain about the terrible service I was getting – suggested I work with Anne. They told me she was the best – and I have to agree that they were right. At first I was cynical, and gave her a hard time over some of the matches she gave me, but I trusted her, because she always got the major elements right.

When I met Stephen – who wasn't at all the type of guy I'd ever thought I'd want to meet, at least on paper – I was blown away. The chemistry was instant, but there was more to him than that. Meeting Stephen helped me realize that smart, considerate, brilliant guys are out there and not all of them have to work in so-called “professional” fields to be making a difference.

The first thing we did when things got serious was to buy a cottage. Our kids – his three and my three – got to know each other there. It's been more than three years now, and this group has somehow formed a family. That's the way we all became The Brady Bunch!

When I found myself suddenly single after a long relationship ended, one of the first things my friends suggested I do was to join a popular online dating site. I’d never even considered having to turn to the Internet to find love, but I realized that after more than a decade out of the single social scene, I wouldn’t know where to begin to look in the real world.

After one awkward date, my profile sat idle for several months, until I was sure I was ready to meet someone. I started contacting women who appealed to me, and while I’d get a response once in a while, I found that it was even worse to be ignored than it was to be rejected. I needed to learn how to contact women in a manner that made them want to write back to me, and I needed serious help with my profile. Even my picture was terrible - I know that now, of course.

Luckily, one of my friends was a friend of Anne M.. He recommended that I meet with her to see if she could “pimp” my profile and me some better results. While I was surprised by some of her suggestions, they definitely worked - and since she’s started selecting the women I contact, I’ve been on several really great dates. While I haven’t yet met “the one,” I’ve met some who have come pretty close - and before my Junia consultation, I could have told you some really funny stories. Now, I’m eager and excited to see new messages in my inbox instead of gazing at photos of women I thought just weren’t interested in me.